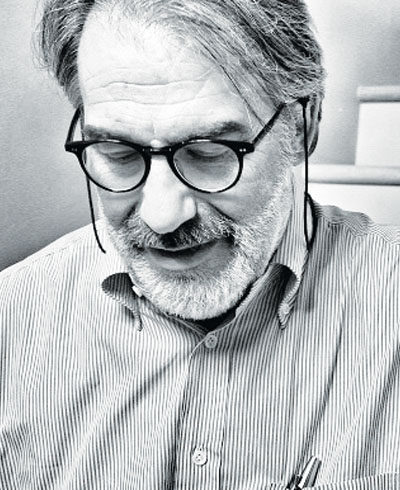 Bruno Pozzi started his activity working in the studio of Architect Marco Zanuso where he worked alongside Richard Sapper. In 1973 he joins the Studio De Pas, D'Urbino Lomazzi and also starts working with Paolo Rosa of Studio Azzurro.

His early years are mostly dedicated to designing trade fair layouts. From the 1980s his attention shifts to furniture. In 1982 he becomes an associate of architects Gianluigi Pieruzzi and Marco Duina, and starts working with several different companies in the Italian design scene, both for residential and contract assignments, including B&B, Minotti, La Palma, Ciatti a Tavola. For the latter he designs Axis for which he and Marco Duina are rewarded with a special mention at the 1987 Compasso d'Oro.

In the 1990s he works with Luca Martignon on the development of projects for Tonelli, Scavolini, B.V. Design. Together they also co-ordinate interior design projects for banking groups, including Caboto-Gruppo Ambrosiano Veneto, Credem and Abaxbank.

Since 1978 he has been professor of Architecture and Design at the Liceo Artistico Statale in Busto Arsizio.

Marco Duina was born in 1954 and was awarded a degree in Architecture by the Milan Polytechnic in 1978.

His early career was shaped in the BBPR and De Pas, D'Urbino Lomazzi Studios in Milan, with a specific focus on architecture, furniture and industrial design.

In the 1980’s he started working with Gianluigi Pieruzzi and Bruno Pozzi, with whom he was selected for the 1987 edition of the Compasso d'Oro for the design of the Axis kitchen range made for Ciatti a Tavola.

Since the 1990s he has been Visiting Professor at the Brera Academy in Milan. In those same years he started to focus also on the design of graphic systems and communication by images.

Since the 2000s he has been involved in regeneration and restoration of buildings: he was in charge of the restoration of the marble façades of Casa Rasini in Milan, characterised by the philological reconstruction of the composition features present in the original 1932 project by the architects Ponti and Lancia.