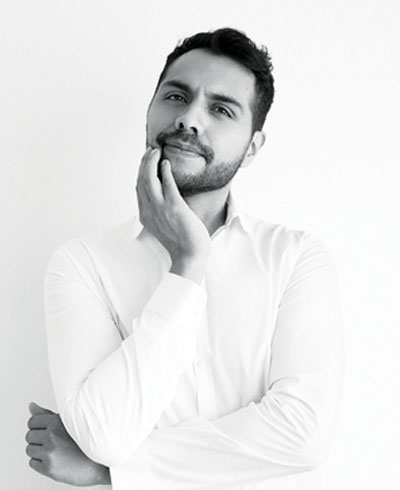 Pragmatic, humorous and poetic, are words that best describe Joel Escalona work. Born in Mexico City in 1986 and graduated in Industrial Design in 2009 from Universidad Autónoma Metropolitana-Azcapotzalco he believes in ideas that engage meaningfully, that push the limits of contemporary design, that have the ability of pulling people into the stories they shelter.

Design is a statement in itself, thus it should always have a strong voice that is technologically defiant, symbolically challenging and of course effective in functionality.

Working with clients in Mexico, USA, Italy, France and Denmark have led him to aim for a multidisciplinary agency able to provide tangible value to each project, while enjoying a full schematic view of the creative process in many levels and different contexts, enriching his studio's values.

His work has been exhibited in the mayor design capitals of the world, such as New York, Paris, Milan, and Mexico City. He was also selected to take part in the ICFF Studio exhibition at the International Contemporary Furniture Fair in New York and was invited to represent South America Young Design at the Maison & Objet’s special exhibition Talents À La Carte in Paris, also featured in the Milan Furniture Fair, Mexico Design Week and the Beijing Design Fair, among several contemporary design exhibitions.

Introduced as one of “the new wave of young designers to watch for in the world” by Wallpaper* magazine, selected as one of the "50 Emergent Talents of the Americas" by Arquine magazine and published in GQ’s extraordinary young people feature, Escalona’s work has appeared in the most prestigious design publications and books worldwide.

In addition to his core design business, Joel Escalona is a founding member of Cooperativa Panorámica a group of Mexican designers exploring new design territories, also he is creative director of the contemporary furniture brand NONO, teaches at CENTRO one of the most important design universities in Mexico City and is a frequent guest lecturer at several design schools and events.