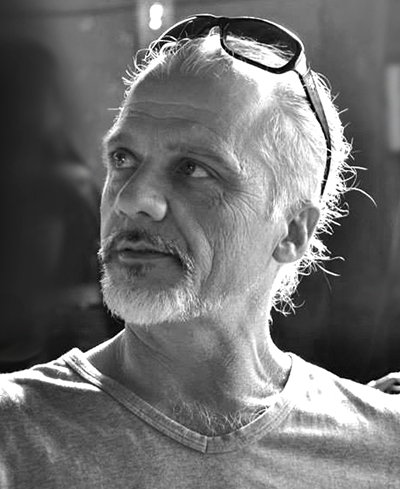 Roberto Mora, born in Parma in 1964, defines himself as a self-taught designer.

Painter and Graphic at the beginning, in the 90s he approached the world of Design where he discovered his passion for iron, from the most diverse forms and origins.

He started with the creation of "unique pieces": objects and sculptures between function and dystrophies of the form. Unrefined shapes that tend to become lighter over the years. Lightness, transparency, reinterpretation and humor often characterise his most recent works.

Mora likes to consider himself as an atypical designer, distant from the logic of large-scale production. He prefers small numbered productions to exhibit in international design events or in private Italian and foreign collections.

In 2004 he took part in the "Radical Design" exhibition curated by Gianni Pettena. The journey documents the evolution of design from the 60s to nowadays, where Roberto Mora is considered as a representative of the last generation of self-producing designers, along with a few other names including, among others, the Campana Brothers.

In 2005 he was invited by Alessandro Mendini to be part of the international exhibition "Art of Italian Design”. Also, in 2010 Mendini chooses him for "Quali cose siamo", a project hosted for over a year by the Triennale di Milano.

Always present in Milan, he has exhibited in Athens, Paris, Moscow and New York.